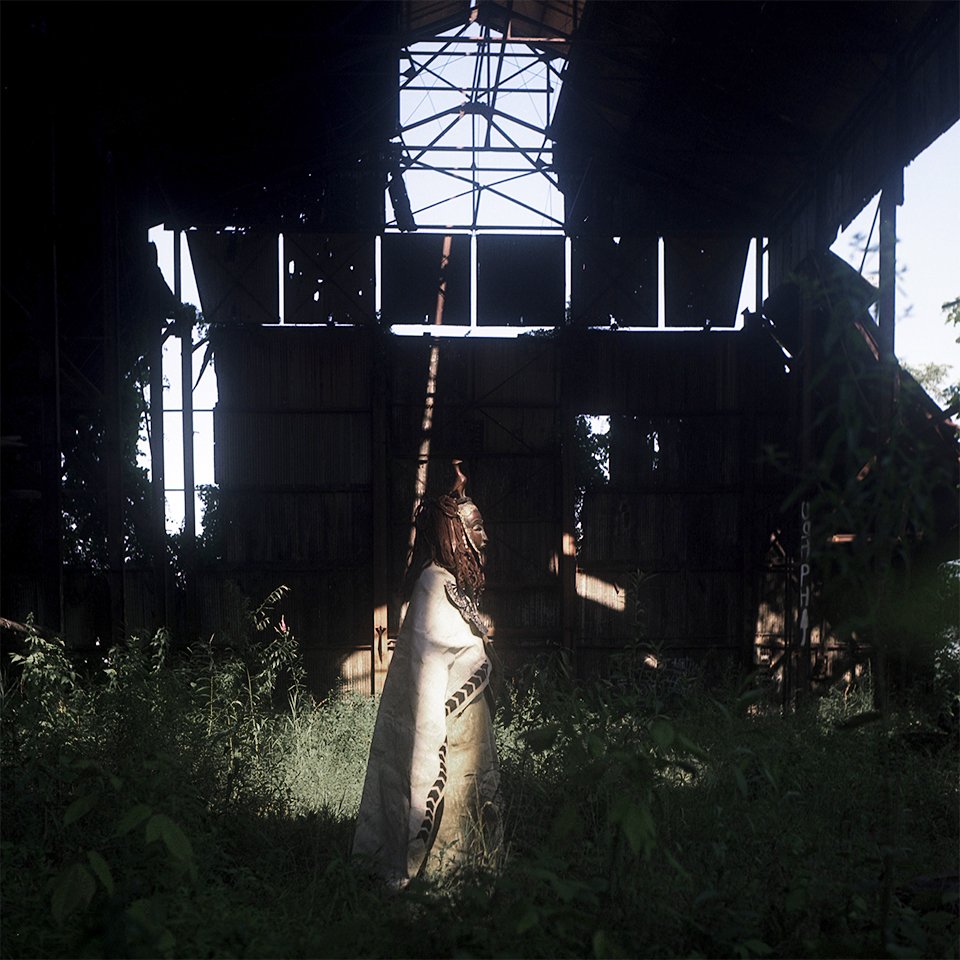 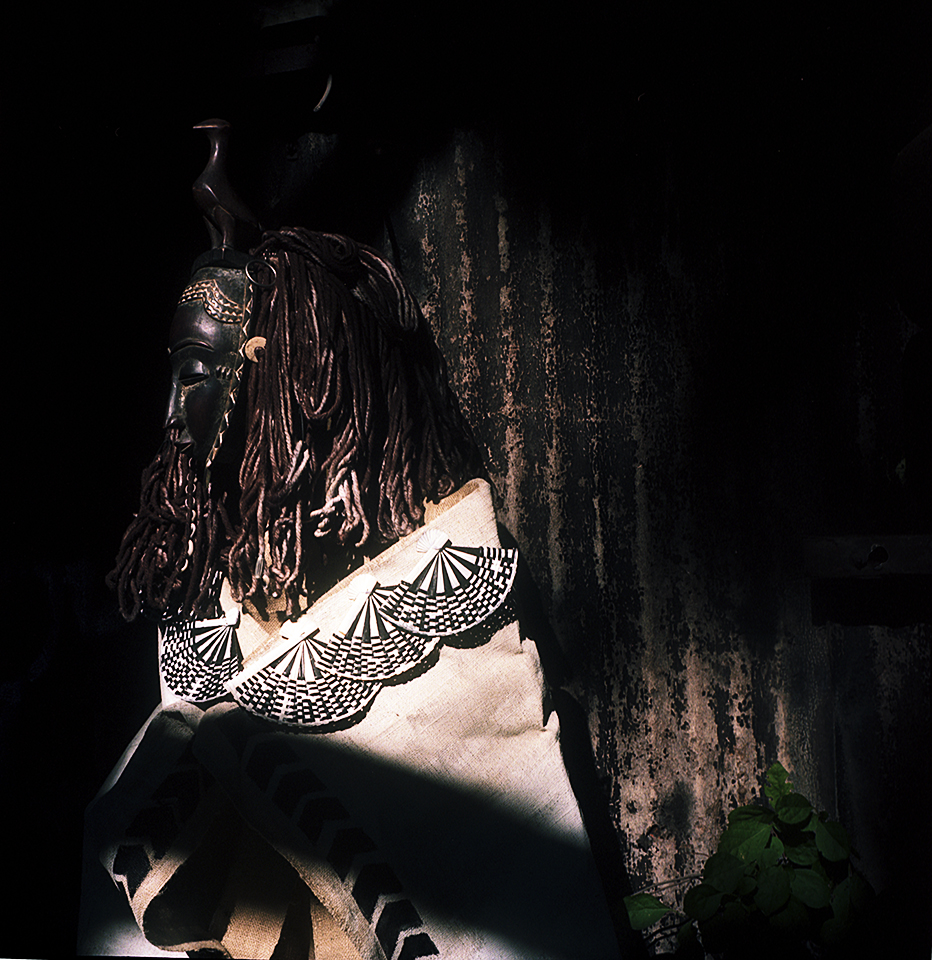 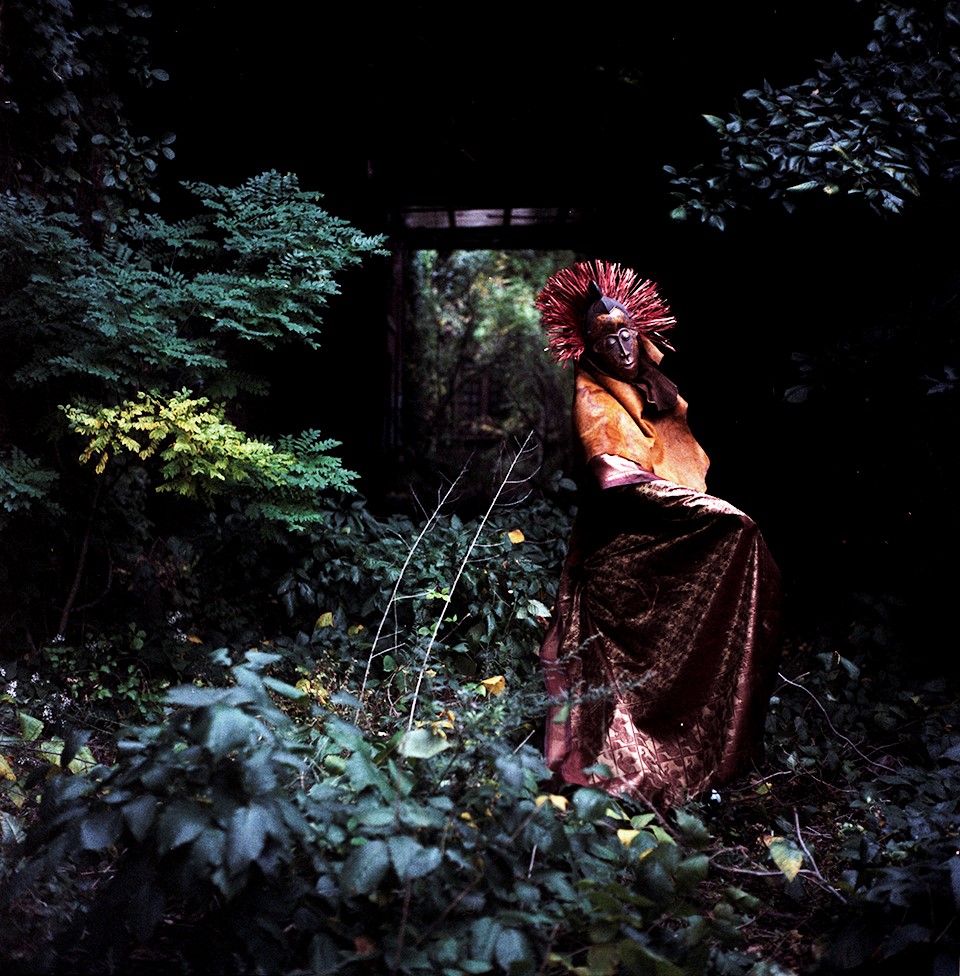 KIRITIN BEYER: The Dance of the Geisha, 2013

“Reappropriation” is the continuation of an earlier photo series I did in 2010 on the Salvation Islands in French Guiana. Between 1852 and 1953, the islands were part of a notorious penal colony for the worst criminals of France. Ruins are now all that is left of it. While the landscape was stunning, I felt the weight of what once existed. I also saw how nature had cleansed the past.

In 2012, I worked with my partner, Parris Jaru, to create “Reappropriation.” As a painter, he often uses natural elements in his practice and his Jamaican and American-Indian origins shape his creative process.

We drew inspiration from my time in Guiana and from Parris’ heritage. “Reappropriation” explores the constant battle between man-made structures, artificial landscapes and consumption – the battle between ownership and preservation, short-term use and long-term benefice. We aim to show through photographs the relationship between these conflicting forces and the effect one has on the others.

In traditional societies, masks and costumes are both a representation of the spirits and a way to connect with them. The transformation of the mask wearer into a spiritual entity requires rituals, such as specific music and dances, which we echoed in how Parris moved in the space.

In contrast to the natural and spiritual world, we chose as location former striving industrial complex, now abandoned and forgotten.

WHY I LOVE IT, by Aurélie
“Reappropriation” is an apt title for this series. Abandoned spaces are reappropriated and turned into private playgrounds, while ancient customs from Africa and the Caribbean are reinvented.

The photographs are a collaborative effort between Kiritin Beyer, a French & Dutch photographer, and Parris Jaru, a Jamaica-born painter. The creative pair (and couple in real life) worked together to find desolate locations, source masks, create costumes and research movements and poses to reenact.

The resulting images are striking and filled with unanswered questions. A mysterious character inhabits a no-man’s land of empty buildings that have been reclaimed by nature. He changes appearances and his face is always hidden by a mask. We know nothing of him or where he is; he simply stands before us, caught in the middle of rituals and dances he alone knows the meaning of.

I love art that makes you wonder and takes you on a journey.

KIRITIN BEYER: Kiritin Beyer was born in Copenhagen to a French mother and a Danish father. After spending some of her childhood in the French Pyrénées mountains, she moved to Paris to join the National Circus School. There she was exposed to the plasticity of the human body, an experience that later influenced her work.

The five years Kiritin spent in Paris working as a model ultimately convinced her that she enjoyed being behind the lens rather than in front of it. She came to New York to pursue photography in 2004 and began assisting fashion photographers. She made her way up working as a gaffer and a camera operator on film sets. Kiritin got to work with some of the biggest names in entertainment like Beyonce & Jay Z, Alicia Keys, Metallica or Lady Gaga.

In 2012, she won a Film fellowship from BRIC (a Brooklyn-based art foundation). Later that year Kiritin traveled to East Africa with artist Parris Jaru to film “Imagination is Creation.” The short film was nominated in the Arts Category at the Emmy Awards. When she went to India to document natural colors and pigments used in textiles, arts and Ayurveda practice, the resulting film, “A Trail of Pigment,” received the B Free Award in the “Artistic and Health categories” from BRIC.

In 2016, Kiritin created a short film based on Parris Jaru’s paintings for the musical band Les Nubians. The video was projected during some of their performances in the US. Kiritin also directed their music video, Liberation. Since then, she directed and edited numerous videos, including Steel Lovin’ by Red Sahara, and is in pre-production for the artist Oddisee.

Kiritin Beyer also works as a photographer and videographer for interior magazines and designers in New York.

Arriving in New York in the mid-eighties, he was entranced by the art scene and began to paint. While working at Marvel Comics he met some of the pioneers of comic art, which influenced his work. To gain exposure, Parris began selling his paintings on the streets of Soho and the East Village, which had vibrant art communities then. He befriended and collaborated with some of the most talented painters of the underground art scene at the time.

Parris now resides in Brooklyn, NY, and displays and sells his paintings at art fairs in New York, Miami and abroad. He also works on commissioned artworks in collaboration with the Arco Gallery in Soho.

Parris states: “The more I give to artistic expression the more it has given me. Painting and poetry have become my instrument of survival as well as my greatest love in this life. When I show my works my only expectation is to speak to those who have a desire to hear my words outside of normal conversation. Then my job for the moment is done.”