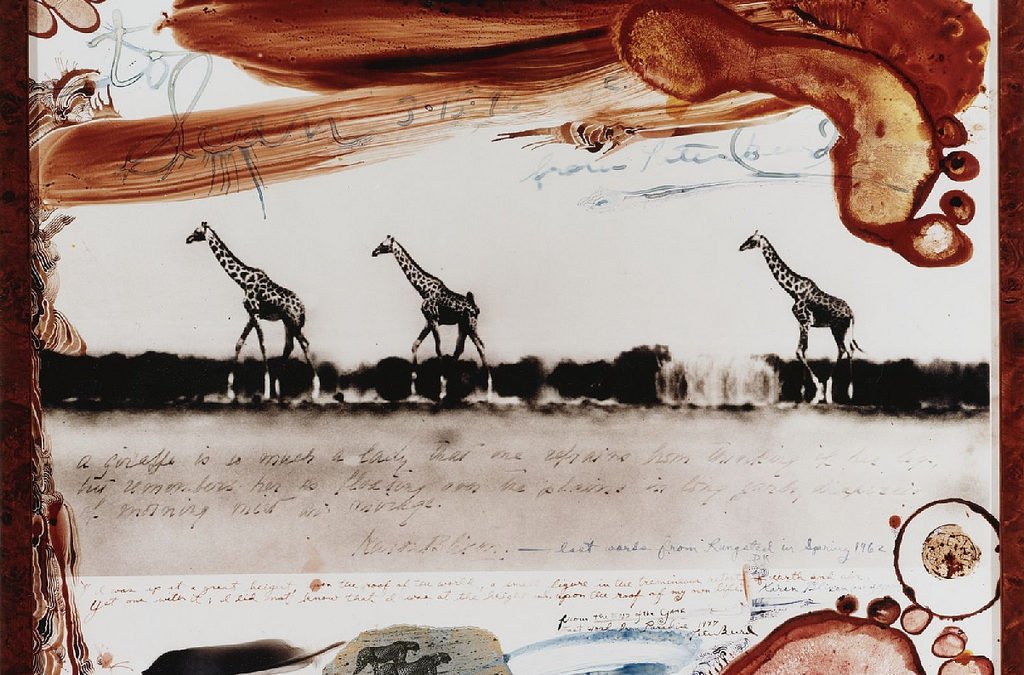 I’ll admit that I have a crush on Peter Beard, but then again, who doesn’t?

I only met him once, at one of his openings. He was charming and charismatic, but my crush really stemmed from a documentary I saw about his life. And what a life it was!

Handsome, talented, fearless, both a socialite and an adventurer… Peter Beard was the Hemingway of photography, a character larger than life, with endless stories to tell.

Born in 1938 as the heir of a railroad fortune, Peter Beard began keeping diaries as a kid and quickly added drawings, collages and his photographs to them.

He continued journaling throughout his life and his journals became ever more elaborate and layered, with mementos attached to them, newspaper clippings and obsessive record-keeping of his life… His journals are works of art in and of themselves.

At seventeen he went on a life-changing trip to Africa to work on a film documenting rare wildlife. From then on, Africa was an integral part of his life.

After graduating from Yale, he went back to Kenya and became passionate about preserving its wildlife after witnessing (and photographing) the death of thousands of elephants and other animals. This work became the subject of his first book, “The End of the Game.”

He bought a ranch in Kenya and started to split his time between America and Africa. On the East Coast, he lived the life of a celebrated artist and socialite, hanging out with Jackie Bouvier and Andy Warhol alike. In East Africa, he lived among nature and befriended local tribes. His love for Kenya, its people and wildlife is reflected in his photographs.

His death in 2020 was tragic, but there was something grand about it. Suffering from dementia, he wandered into the wild and died alone, out in nature. I found his death both arrowing and fitting as he was not the kind of man to die peacefully in his bed. I sometimes wonder if I love his images for themselves, or because they are part and parcel of his extraordinary life. I’m not sure I know, but I don’t think it really matters anyway — some artists are inseparable from their art, and he was one of them.

Disclaimer: Aurelie’s Gallery does not represent Peter Beard. My “Photographers I love” series is purely for inspiration and to encourage discussion.